The Differences Between Gas Balloons and Hot Air Balloons 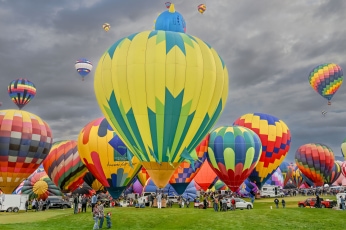 Gas and hot air balloons share a number of similarities. The part of the balloon that holds the hot air or gas is called the envelope.

The part of the balloon that carries passengers is called the gondola, or basket. The differences between the two types of balloons range from cost and flight duration to passenger load and lift.

Hot air balloons fly as a result of a hotter air temperature inside the envelope than outside.

Hot air rises. Enough hot air will gently lift the envelope, gondola and passengers into the sky. Pilots can control their ascent and descent by heating more air with "burners" or slowly releasing air allowing the heated air to cool off or by using a variety of vents located in strategic points on the envelope vent out the hot air. A new commercial-made hot air balloon will cost in the neighborhood of $30,000 to $40,000. The propane used to fuel the burner which heats the air inside the envelope generally costs $30-$40 and lasts for one to two hours of flight. The ideal time for balloons to fly is typically in the morning, when the cooler temperatures and lower winds provide a better environment for flying. Balloonists prefer winds to be ten miles per hour or less.

Gas balloons fly as a result of a lifting gas in their envelopes.

In the United States, pilots fly with helium or hydrogen as the lifting gas. Both gases are lighter than air. Gas balloons get their initial lift from the helium or hydrogen pumped into their envelopes. Pilots have two ways to control the altitude of their balloon. To descend, pilots can either vent helium or hydrogen through the top of their envelope or wait for the cooler evening temperatures to contract the gas in the envelope. To ascend, pilots can either drop ballast (typically sand or water) or wait for warmer daytime temperatures to heat the gas and cause it to expand in the envelope. The helium to fill the envelope for two to three days of flight generally costs more than $10,000. A similar amount of hydrogen will cost about $1,200. Due to this cost difference and the limited availability of helium, most pilots now fly with hydrogen as their lifting gas. Gas balloon pilots also prefer winds to be below twelve miles per hour for launching and landing.