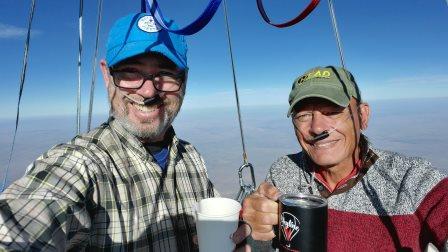 The data is parsed, the tracks are analyzed, the numbers are crunched, and while there were a few little tweaks, the result is the same. Rhode Island’s Noah Forden and Pennsylvania’s Bert Padelt are the 24th America’s Challenge champions.

Forden and Padelt (Team 4) were the race leaders almost throughout, pursuing a strategically risky strategy of going to higher altitudes early to catch faster winds.

The final results (you can view the official scoring sheet, including launch/landing coordinates, here):

This was a tough race for tough men and women. Forden and Padelt’s winning distance was the shortest in the 24-year history of the America’s Challenge. Exceptionally light winds over New Mexico and Texas meant the teams had to work hard to find a way to get anywhere at all. This often meant flying in bitter cold (11 bone-chilling degrees Fahrenheit in both Team 4’s and Team 2’s baskets), on oxygen, in near total darkness. This made for a highly tactical competition reminiscent of European gas ballooning competitions, where international borders and smaller land masses limit how far teams can fly.

Unusually, this was also an all-American race with a smaller-than-usual number of competitors. Three teams from Europe or including European members who had hoped to compete had to drop out of the race due to COVID restrictions and issues with international travel and shipping.