Dating back more than 100 years, the Gordon Bennett race is the premier gas balloon distance race and attracts some of the most experienced and distinguished pilot teams from around the world. This legendary race is often compared to the America’s Cup Yacht Race for the endurance necessary to compete and win. And while the mission of the race is simple, executing that mission is anything but easy. The winning team is the one that flies the farthest distance from the launch site. But desire alone won’t carry a team to victory.

Physical resistance, mental strength, strong morale and incredible knowledge of winds and weather are the keys to taking home the cup. The race is named after James Gordon Bennett Jr., who founded the International Herald Tribune and was a great sponsor of air sports. Each country is allowed to enter their three best teams.

In this section you can learn more about the Gordon Bennett and its history and access some of the statistics of past races. Once the race begins, you can follow the competitors’ progress via live computerized tracking on this site. 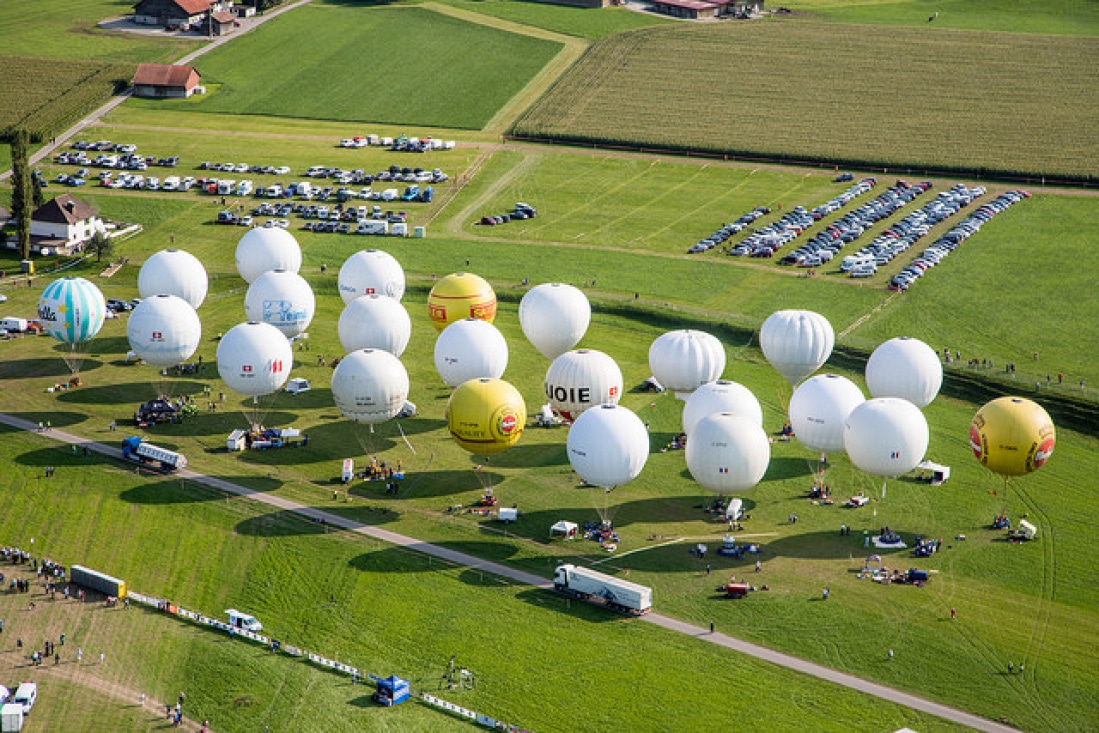 A non-profit organization, the FAI is represented by 85 member countries. Founder of the Gordon Bennett Cup races, James Gordon Bennett, Jr., turned to the FAI for assistance in organizing the first Coupe Aéronautique Gordon Bennett, launched from Tuileries Gardens in Paris, France on September 30, 1906. The inaugural event was such a success, Bennett turned its future over to the FAI while he continued to provide the prestigious trophy under his name. It is the Commission Internationale D'Aerostation (CIA), also known today as the FAI Ballooning Commission, that is responsible for making sure rules are followed for this event, as well as other sanctioned ballooning competitions. To learn all about the Fédération Aéronautique Internationale and the CIA, please be sure to visit the FAI website at http://www.fai.org. Some of the more notable ballooning pages include:

James Gordon Bennett, Jr., a steel engraving by F.T. Stuart after a photograph. Courtesy of the U.S. Naval Historical Center

Newspaperman, adventurer, sportsman -- and a magnet for scandal -- James Gordon Bennett, Jr. was a very interesting fellow. His name even became a popular expletive in England -- “Gordon Bennett!” means essentially, “Good Lord!” Today’s tabloids would have loved him.

As a newspaperman, Bennett continued in his father’s footsteps, luring prominent writers and financing newsworthy ventures. It was Bennett who sent Henry Stanley to Africa to find Dr. David Livingstone (“Dr. Livingstone, I presume?), and who financed the disastrous expedition of the Jeanette to explore the Arctic and the North Pole (the expedition’s leader and 19 crew members died). Several islands in Siberia are named after Bennett.

After 1877, Bennett lived in Europe, mostly on his 301-foot yacht. He sort of had to, having precipitated a scandal so great that he was no longer welcome in polite American society. It’s even listed in the Guinness Book of World Records under the heading, “Greatest Engagement Faux Pas.” Bennett, it is said, showed up late to his fiancée’s father’s New Year’s party roaring drunk, and proceeded to mistake the fireplace for a toilet, urinating into the flames in front of his astonished future in-laws and their guests. The engagement was broken off -- perhaps a good thing since Bennett gained quite a reputation as a playboy.

Bennett was able to run the Herald from abroad via transatlantic cable. He partnered with John W. MacKay to organize the Commercial Cable Company to handle European dispatches. A cable-laying ship, the MacKay-Bennett, was named for the two founders. In 1912, the MacKay-Bennett was chartered by the White Star Line to recover bodies from the wreck of the Titanic. The ship found the remains of 306 victims, including those of John Jacob Astor and Isador Straus.

Bennett also played a role in luring Guglielmo Marconi -- and hence, wireless communication -- to the United States. In 1899, he persuaded Marconi to come to New York to demonstrate his new invention. His motive: he figured he could scoop his rivals by using wireless to transmit results of a yacht race. It worked.

Today, Gordon Bennett is probably best known for his contribution to sports. He is generally credited with introducing polo to the United States. He also established trophies for races in a number of other sports, including yachting, automobiles, airplanes, and of course, balloons. As the organizer of the world’s first major automobile race, the Gordon Bennett Motor Car Road Racing Trials, he is considered to be the father of auto racing. This long-distance endurance race was founded in 1900 and ran through 1905. As with the later balloon race, the winning driver’s country had the honor of hosting the next year’s race. Ironically, Bennett never drove a car and never attended the race.

The Gordon Bennett balloon race is the only one of the events Bennett founded that survives today as a major international event. Bennett remained active in journalism into World War I, but his charitable contributions, expensive journalistic stunts, outrageous lifestyle, and passion for sports had depleted his and the Herald’s resources. Bennett died in France in 1918, and five years later, the Herald merged with its hated rival the Tribune to become the New York Herald-Tribune. 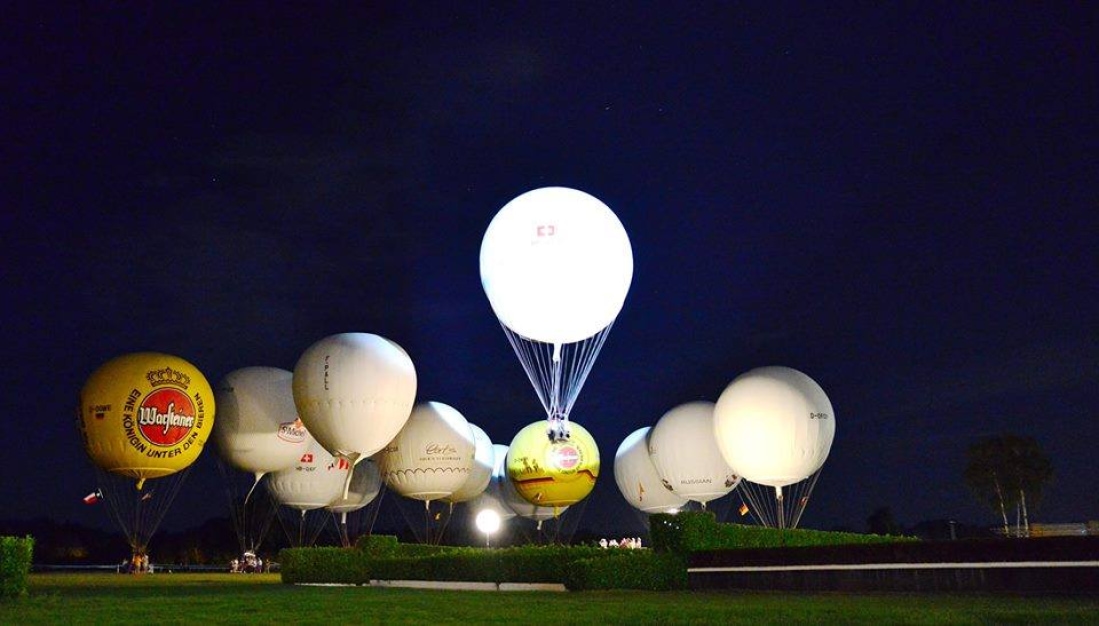 It’s a walk -- not even close.  In 1995, Wilhelm Eimers and Bernd Landsmann flew for a whopping 92 hr. 11. min in scoring their Gordon Bennett win - longer than it took to complete the first crossing of the Pacific!  That same year, Johann Furstner and Gerald Sturzlinger of Austria stayed aloft for 80 hours.  More typically, Gordon Bennett teams stay in the air for 50-65 hours.  In 2005 when Bob Berben and Benoit Simeons broke the distance record, their flight time was 64.39 hours.

Several Gordon Bennett teams have had to explain themselves to the local gendarmes upon landing, most recently the Leys brothers in 2003.  After flying nearly 70 hours -- including 2½ days over the Atlantic Ocean -- they landed at Zambujeira do Mar in Portugal, only to be arrested.  (They won the race, though.)

In the 1923 race, the balloons of three teams were hit by lightning; five of the six pilots aboard were killed.  In those days (and up until 1998), Gordon Bennett races were never postponed or cancelled because of the weather.

In 1995, the race launched at Wil, Switzerland and several teams flew into the nations of the former Soviet Union.  The U.S. Virgin Islands team of Alan Fraenckel and John-Stuart Jervis were shot down and killed by the Belarus Air Force.  The Belarus armed forces also forced down the balloons of two American teams, J. Michael Wallace/Kevin Brielmann, and David Levin/Mark Sullivan.

In 2000, the German team of Thomas Hora and Volker Löschhorn launched in Belgium and stayed aloft for 53 hours before being forced to ditch in the North Sea.  They were not injured, but suffered the indignity of receiving no result because, under the Gordon Bennett rules, balloons must land on dry land.

Austria’s Josef Starkbaum and Belgium’s Ernest Demuyter are the undisputed Kings of the Gordon Bennett.  Only five pilots have won the race more than twice:

Women in the Coupe Gordon Bennett

The first woman to fly in the Gordon Bennett was Mme. Gustave Goldschmidt, co-pilot to Renee Rumpelmayer of France. (They finished 6th.)  It was not until 1984 that an all-female crew competed in the race.  That year, the late Nikki Caplan flew to an 11th place finish with co-pilot Jane C. Buckless.

But it was not until last year -- 2004 -- that a woman won the race -- co-pilot Carol Rymer Davis of the USA, who competed with pilot Richard Abruzzo.  It is the latest of many ballooning achievements for Rymer Davis, who holds the world altitude record for class AX-5 balloons (900-1,200 cubic meters).  She has twice been awarded the Montgolfier Diploma, one of ballooning’s most prestigous honors.

Other women have come close to Gordon Bennett glory.  The last time the race was held in Albuquerque (1999), Danielle Francoeur of Canada, flying with Leo Burman, finished second to Philipe de Cock of Belgium.

In recent years, many women have competed in the major events (Gordon Bennett, World Championships, World Air Games, and America’s Challenge).  One of the most successful is Astrid Gerhardt of Germany, whose team won the most recent World Air Games and finished second in the most recent World Gas Balloon Championships.  Other well-known female competitors are Lesley Pritchard, Janet Folkes, Barbara Fricke, Ruth Wilson, Judy Lynne, Jenny Houghton, Tami Stevenson-Bradley, Marsha Lambertson, and Ruth Lind.  In 2005, women made another great step within the Coupe Gordon Bennett, Pat Brake became the first women to direct the event.