In 2005 the Albuquerque International Balloon Fiesta Heritage Committee established the Heritage Pin, a limited-edition commemorative pin honoring pioneers in ballooning and the Balloon Fiesta in particular. The Heritage Pin is awarded yearly in recognition of those who have perpetuated the legacy they've helped create. Mark Sullivan has been a member of the Balloon Fiesta Board of Directors since 1989. During his tenure on the board, Mark was instrumental in establishing the Special Shape Rodeo and founded the Balloon Fiesta's America's Challenge distance race to give gas ballooning an international presence on American soil.

Mark began flying hot air balloons in the early 1980s and gas balloons a few years later.  His first hot air balloon advertised the famed Billy Bob's Saloon in Fort Worth, TX.  Since then, Mark has racked up more than 3,200 hours in hot air and gas balloons. Mark has become best known as the Ironman of distance gas ballooning, having flown in more distance gas balloon events than any balloonist in history, a combined 43 Coupe Aeronautique Gordon Bennett, and America's Challenge races.  With his flying partner Cheri White, he’s won the America's Challenge twice and finished as high as third in the Gordon Bennett, the world championships of distance gas ballooning. He has also won the U.S. National Gas Balloon Championships twice and is a former U.S. Team Hot Air Ballooning Champion.

In nearly 40 years, Mark has earned almost every major distinction awarded in the sport, including the Montgolfier Diplome, the CIA Gold Badge with three Diamonds, the Balloon Federation of America Shields-Trauger and Al Desmond Awards, the AAAA Sid Cutter Award, induction into the Balloon Fiesta Hall of Fame, and the AIBF Heritage Award. Jim Byrd – also known to many as Jimmy -- began his ballooning career in March 1973 when he joined the Albuquerque Aerostat Ascension Association (AAAA) as a non-flying club member.

Jim was Assistant Safety Officer for AIBF in 1984 and 1985 but is best known for his contributions to competition scoring.  Jim wrote the first software for scoring balloon races in 1990, which was used by both AAAA and the Balloon Fiesta. The next year, he updated and rewrote that program. Jim rewrote the Balloon Fiesta scoring program many times over the years. George Hahn got his first balloon ride in 1975. And like many balloonists was hooked at the first burn. He bought a balloon, quickly earned a private and commercial certificate and even a gas rating. By the early 80s, he was participating in the first gas flights at Balloon Fiesta. He became the Chief Safety Officer for AIBF in 1984, Assistant Balloonmeister in 1985, and Balloonmeister in 1986 and 1987. George served 22 years on the Balloon Fiesta Board of Directors, including terms as Vice-President in 1989 and 1990 and as President in 1991. While on the board, George played a key role in improving the organization’s fiscal, management, and budgeting practices. In the mid -1980s he acquired AERCO, one of Albuquerque’s and the country’s oldest and most established balloon sales and repair facilities. He ran AERCO for nearly 30 years and also briefly had an ownership interest in US balloon manufacturer Firefly (Balloon Works/Barnes). As a respected instructor and FAA Designated Pilot Examiner, George trained and/or certified dozens of balloon pilots. He was an organizer and participant in numerous safety seminars in Albuquerque and across the country and gave regular safety talks to groups of pilots. George and his wife Alice are now retired in Texas, but still avid supporters of Balloon Fiesta. 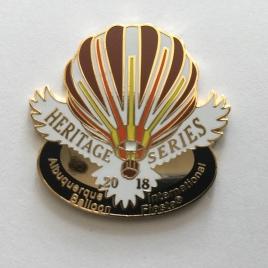 Charlotte Kinney obtained her balloon pilot license in 1977, started volunteering at Balloon Fiesta shortly afterward. She became the first female Balloonmeisterin in 1982 directing all the flight activities at Balloon Fiesta. In 1984, she teamed up with her successor Neida Courtney to become the first and only duo to share the chief official duties in any year. Charlotte started the daily newsletter, Fiesta Flyer, which was produced, printed, and distributed daily until the Internet came along. Charlotte now serves on the Heritage Committee working to preserve the history of Balloon Fiesta. She also still contributes articles to the Balloon Fiesta program and was one of seven co-editors of the award-winning book, Albuquerque International Balloon Fiesta. Charlotte is also the daughter of Harry Kinney, former mayor of Albuquerque, himself a key figure in the heritage of the Albuquerque International Balloon Fiesta. 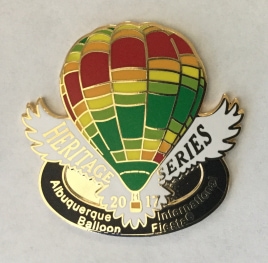 Matt Guthrie and the Balloon Fiesta literally grew up together. As a youngster growing up in Albuquerque, Matt took his first balloon flight in 1974, just the third year of the Balloon Fiesta's existence. In 1980, he became a launch director, earning his private pilot certificate the following year. By 1983, Matt had worked his way up to Chief Launch Officer and continued to work tirelessly behind the scenes helping to set up the launch field. In 1984 Matt became an FAA-certified repairman and later founded his own balloon-related company. Matt joined the Board of Directors in 2006 and continues to be an inspiration to every starry-eyed youngster who dreams of becoming a balloonist. 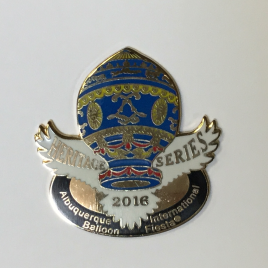 Jacqueline Hockey was one of the earliest members of the Balloon Fiesta Board of Directors, becoming the event's treasurer in 1978. She served on the Board of Directors for 25 years, during which time she not only oversaw corporate hospitality, but many of the Balloon Fiesta's biggest private parties for sponsors, pilots, and guests. One that is near and dear to her heart is the Flight of the Nations party recognizing international pilots and guests. Originally from France, Jacqueline, with her fluent command of French, continues to make pilots and visitors from abroad feel especially welcome in Albuquerque. 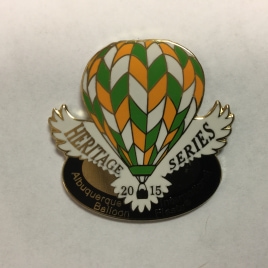 Dick Rice is a hot air balloon pilot and longtime Balloon Fiesta supporter; having joined the Albuquerque International Balloon Fiesta board of directors in 1977. He has served on the board as president and treasurer, currently serving as treasurer. As a retired successful CPA, his knowledge of all things fiscal has made his contributions to the Balloon Fiesta invaluable. Dick flies the "Hearts 'A Fire" balloon. 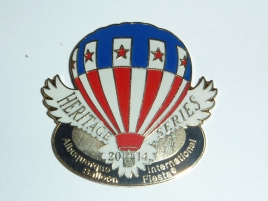 Wally Book, one of Albuquerque's earliest balloon pilots and staunchest advocates for flight safety at the Balloon Fiesta. He has volunteered for every Balloon Fiesta in one official duty or another. For more than 30 years Wally has been a Safety Officer or Chief Safety Officer, with a brief hiatus to serve as Assistant Balloonmeister in 1999-2000 and Balloonmeister in 2001-2002. Wally speaks fluent French and has long served as an ambassador to the Balloon Fiesta's international pilots and guests. 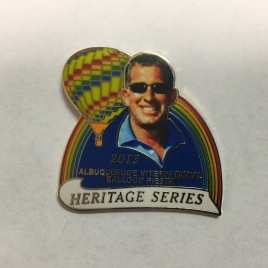 Every Balloon Fiesta guest who enjoys the Balloon Glows and Special Shape RodeosTM can thank Scott for the pivotal role he played in creating these signature events. Scott served on the Board of Directors of the Balloon Fiesta for five years and has also served the Albuquerque Convention and Visitors Bureau as a board member and as Chairman. As past President, Competition Director, and Safety Officer of Top Gun, Albuquerque's competitive ballooning organization, he has worked hard to promote ballooning safety and healthy competition. Scott is the owner of Rainbow Ryders, the official hot air balloon ride concessionaire of the Albuquerque International Balloon Fiesta. 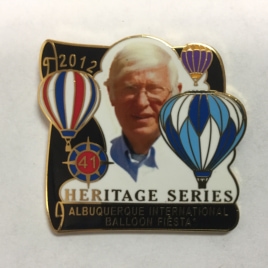 Few have played such a pivotal role in documenting the history of ballooning in New Mexico. For several years Dick edited the Albuquerque Aerostat Ascension Associations (AAAA) Cloudbouncer newsletter and during the period of 1974-1979, he was the Editor of the Balloon Federation of America's (BFA) Ballooning Journal. Dick earned his commercial balloon pilot license in 1973 and flew his balloon Blue Dragon in many of the early Balloon Fiestas. Dick is also a former Navy submariner and played a key role in the commissioning of the USS New Mexico (SSN-779) fast-attack nuclear submarine. He serves as chair of the USS New Mexico Committee of the New Mexico Navy League. 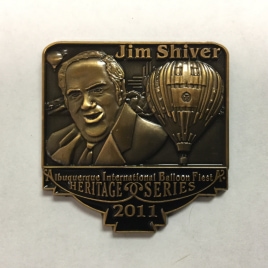 Jim Shiver's many contributions to the Balloon Fiesta can be appreciated by every Balloon Fiesta guest. As a longtime Balloon Fiesta board member and three-term past President, Jim Shiver quietly contributed his labors and those of his construction firm, to the tune of tens of thousands of dollars, to building the considerable infrastructure – supporting a temporary "town" with a population of almost 100,000. The 2011 Heritage Pin shows Jim with his first balloon, Four Corners, which he first flew in the Balloon Fiesta in 1979. 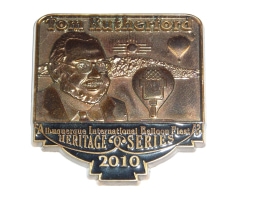 In 1972, Tom Rutherford was an aspiring young politician with a golden radio voice at the radio station 770 KOB (now KKOB). When the station asked Sid Cutter to organize a balloon race as a part of the radio station's 50th-anniversary celebration, Tom was assigned to assist with the "balloon" portion of the event. He fell in love with balloons and ballooning and joined Sid's corporate and events promotion company called World Balloon Championships. For many years Tom flew balloons for corporate clients—most notably Budweiser—at events around the country. As Tom's balloon career took off, his political career did too. He served as a State Senator for 24 years and was Majority Floor Leader at the time of his retirement. He served two terms on the County Commission of Bernalillo County and is now focused on administrative law and governmental affairs. 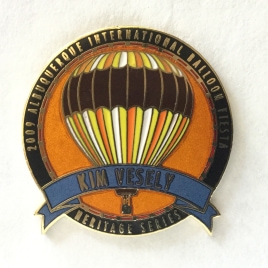 Kim Vesely has been writing about balloonists and ballooning as a former TV news reporter and freelance writer for more than 30 years. She has covered many of ballooning's great "firsts" including the Double Eagle II trans-Atlantic crossing, Double Eagle V trans-Pacific crossing, and the Kitty Hawk flight across North America. Since 2002, Kim has served as editor of the Balloon Fiesta program; additionally, her work has appeared in Ballooning, Balloon Life, and other publications. She has written more articles for the AIBF program than any other person, often without a byline. She served on the Balloon Fiesta Board in 1988-89 and currently serves on the AIBF Heritage Committee and on the Board of Trustees for the Anderson-Abruzzo Albuquerque International Balloon Museum. 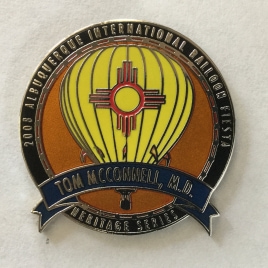 Dr. Tom McConnell is known by most as "Father Time," and is best known as the pilot of "Zia" (the New Mexico State Flag balloon) that has in itself become a widely recognized symbol of the Land of Enchantment. Tom is one of Albuquerque's earliest balloon pilots, part of the second "class" of balloon pilots trained through the Albuquerque Aerostat Ascension Association (AAAA) in 1973. 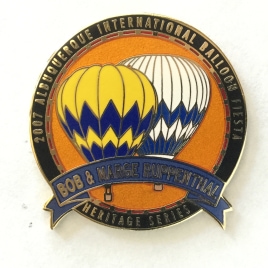 This dynamic duo has often been referred to as "long-time" supporters of Balloon Fiesta. They both served as President of the Board of Directors for Balloon Fiesta. Marge was president in 1980 and 1981; Bob was president in 1989 and 1990. Marge took the helm of the organization as Executive Director in 1989 and served in the capacity for eight years until 1996. The Ruppenthals caught the "ballooning bug" in the 70s, bought a balloon, became pilots, and the rest is history. 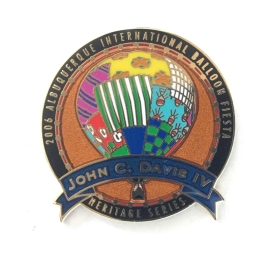 John Davis' longtime involvement with ballooning and Balloon Fiesta is legendary. John is the longest-serving active member of the Balloon Fiesta Board of Directors (1976-present). John has served as Balloonmeister and as President of Balloon Fiesta. He has also served on the board of the Albuquerque Aerostat Ascension Association (AAAA) and as Balloonmeister of several national and international events including the US National Balloon Championships twice – 24 years apart. Sid Cutter's vision put Albuquerque on the map as the hot air balloon capital of the world. Sid had no idea that a little birthday party surprise for his mother would evolve into the Albuquerque International Balloon Fiesta. Thanks to Sid's sense of adventure and tenacity, the Balloon Fiesta has grown from a modest gathering of 13 balloons in 1972 to the largest gathering of hot air balloons in the world.